Heat stress is a subject that is often talked about, but not always taken as seriously as necessary.  Ashley Morris, senior TMS Assessor for Premier Nutrition has analysed data from approx. 1,600 transition cows and compared winter versus summer 2020 to tell us what the real impact is.

Only 15% of dry cows from Premier Nutrition’s Transition Management System (TMS) achieved an average rumen fill score of 4 in August 2020, three times less than in January (46%) and February (55%), according to the business.  This performance hit was further compounded as fresh cows recorded with a rumen score of 4 were also four times less in summer v’s winter.

The post-lockdown project reviewed rumen fill data for both dry and fresh cows from farms during the peak of the summer heatwave in July and August 2020 and compared that with data from the same farms recorded during the low heat stress months of January-February 2020 (Figure 1).

The headline concern, according to Miss Morris, is that as the risk of heat stress measured through THI increases, rumen fills in both groups decline sharply which can lead to serious problems, including reduced rumination, weakened immune function and increased cell counts as well as a significant disruption to herd fertility, reduced milk yield and milk quality. 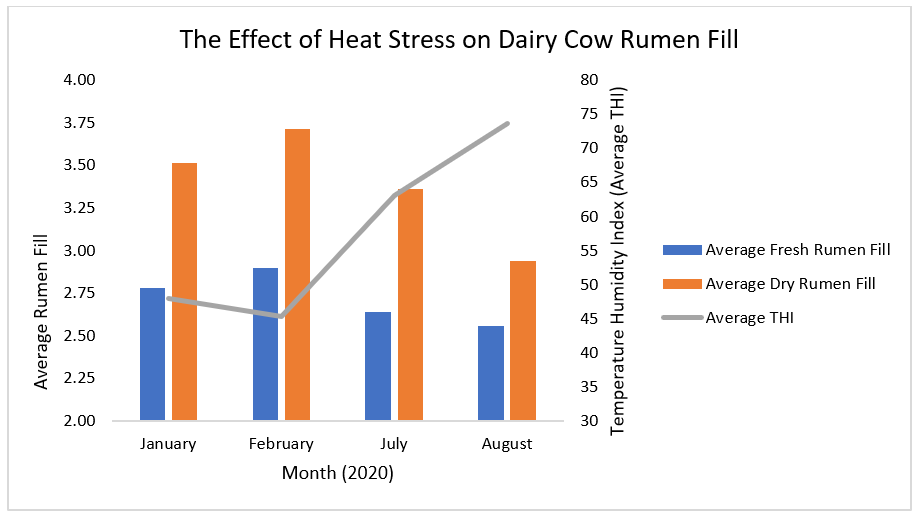 “Cows show signs of heat stress when temperatures are above 22 degrees Celsius and a relative humidity above 60%, the combination of which is measured using the Temperature Humidity Index (THI)”, Ashley clarified.  “Most research shows heat stress occurs for production cows when it reaches between THI >68-72, but a recent study has suggested that, for transition cows, a THI as low as 65 can incur the negative effects of heat stress”.

WHAT THE DATA TELLS US

From February to August there was a mammoth overall drop of 0.77 rumen fill in dry cows and 0.34 in fresh cows with a temperature and humidity change of +19.49 ºC and -8.43% (28.26 THI increase) respectively.  As the company estimates that each quarter point rumen fill score equates to approximately 0.65kg DMI (5%) in close-up dry cows, the data recorded that dry cows on average consumed approximately 5% less dry matter in August compared to those in July and a huge 15% (1.95kg DMI) less than February.

WHY SHOULD WE FOCUS ON DRY COWS?

The company’s recent webinar series confirmed dry cows with a rumen fill less than 3 can also be linked to almost every metabolic transition disease post-calving:

In addition, they reported that cows are more likely to maintain poorer rumen fills through the fresh period based on the dry cow rumen fill score, causing a lasting effect on milk yield.  For example:

“This means herds need a higher proportion of dry cows with a rumen fill of 4 or more to safely achieve the realistic and desirable rumen fill of 3+ in a fresh cow”, Ms Morris confirmed.

With the recognition that heat stress is a real problem for many UK dairy farms, a few recently built dairy units have introduced cooling systems to help reduce the impact of heat stress during the summer.  However, the company advises that management and sound nutritional techniques are implemented to help transition cows cope where stress is a problem.

On a practical note, encouragement of good rumen fills can be achieved by consideration of the following factors:

Once practical items that help to encourage rumen fill have been considered, it is important to then support the cow’s metabolism and health, Ashley advises.  She recommends focusing on:

“It is obvious now that heat stress is a real problem on UK dairy farms and for longer than previously thought”, Ashley concludes.  “Whilst I’m obviously biased, TMS does give farmers the ability to watch their cows transition month by month and dig deep into a multitude of areas affecting their individual farm, such as cow comfort, seasonal affects, and cost of transition to name a few.  But whether you’re a user or not, it’s critically important that the risks of heat stress are reduced or, where heat stress can’t be controlled, it’s vital that the cow’s metabolism is supported so that critical production and/or profit is not lost from our industry.”